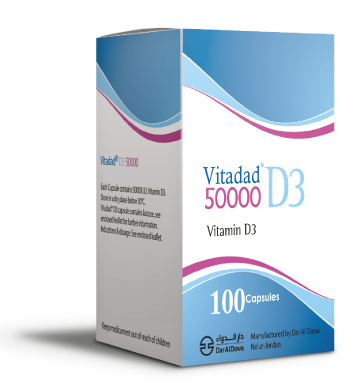 PHARMACOLOGY:
Vitamin D substances are well absorbed from the gastrointestinal tract. The presence of bile is essential for adequate intestinal absorption; absorption may be decreased in patients with decreased fat absorption.
Vitadad® (Cholecalciferol) has a slow onset and a long duration of action. It is hydroxylated in the liver and kidneys.

• The variation of laboratory results from lab to lab has to be taken into account. Vitamin D sufficiency is defined as serum 25(OH) D level of 30 to 100 ng/ml (75-250nmol/L).
• In obese patients, patients with malabsorption syndromes, and patients on medications affecting vitamin D metabolism, a higher dose (two to three times higher dose) of vitamin D is required to maintain a 25(OH)D level above 30 ng/ml, those patients are requested to perform 25(OH)D level lab test on monthly basis.
• Pregnant and Lactating women require 2000 – 4000 I.U. /d to maintain a blood level of 25(OH) D above 30 ng/ml.
Vitadad ®2000 I.U. Tablets: One-two tablets once daily.

CONTRAINDICATIONS:
Vitamin D should not be given to patients with hypercalcemia.

DRUG INTERACTIONS:
• Thiazide diuretics, calcium, or phosphate: Increased risk of hypercalcemia. Plasma calcium concentrations should be monitored.
• Some antiepileptics (e.g., carbamazepine, Phenobarbital, phenytoin, and primidone): Increased vitamin D requirements.
• Rifampicin and isoniazide: Rifampicin and isoniazide may reduce the effectiveness of vitamin D.
• Corticosteroids: Corticosteroids may counteract the effect of vitamin D. WARNINGS AND PRECAUTIONS:
• Vitamin D should be used with caution in infants, who may have increased sensitivity to its effects, and in patients with renal impairment or calculi, or heart disease, who might be at increased risk of organ damage if hypercalcemia occurred.
• Plasma phosphate concentrations should be controlled during vitamin D therapy to reduce the risk of ectopic calcification.
• It is advised that patients receiving pharmacological doses of vitamin D should have their plasma calcium concentration monitored at regular intervals, especially initially or if symptoms suggest toxicity, and in infants if they are breast-fed by mothers receiving pharmacological doses of vitamin D.
• Dose should be monitored by testing for serum vitamin D level. Pregnancy and breastfeeding:
• Pregnancy: Hypercalcemia during pregnancy may produce congenital disorders in the offspring, and neonatal hypoparathyroidism. However, the risks to the fetus of untreated maternal hypoparathyroidism are considered greater than the risks of hypercalcemia due to vitamin D therapy.
• Breast feeding: Vitamin D is distributed into breast milk, and its concentration appears to correlate with the amount of vitamin D in the serum of exclusively breast-fed infants. The American Academy of Pediatrics considers the use of vitamin D to be usually compatible with breast feeding, although they recommend, if the mother is taking pharmacological doses of vitamin D, that the infant be closely monitored for hypercalcemia or clinical manifestations of vitamin D toxicity.

OVERDOSAGE:
Excessive intake of vitamin D leads to the development of hyperphosphatemia or hypercalcemia. Associated effects with hypercalcemia include hypercalciuria, ectopic calcification, renal and cardiovascular damage, muscle weakness, apathy, headache, anorexia, nausea, vomiting, bone pain, proteinuria, and hypertension.
Chronic hypercalcemia can lead to generalized vascular calcification, nephrocalcinosis, and rapid deterioration of renal function. Hypercalcemia has been reported in a patient after brief industrial exposure to cholecalciferol. Symptoms of overdosage include anorexia, lassitude, nausea and vomiting, constipation or diarrhea, polyuria, nocturia, sweating, headache, thirst, somnolence, and vertigo. Infants and children are generally more susceptible to its toxic effects. The vitamin should be withdrawn if toxicity occurs. It has been
stated that vitamin D dietary supplementation may be detrimental in persons already receiving an adequate intake through diet and exposure to sunlight, since the difference between therapeutic and toxic concentrations is relatively small.

STORAGE CONDITIONS:
Store in a dry place below 30°C.